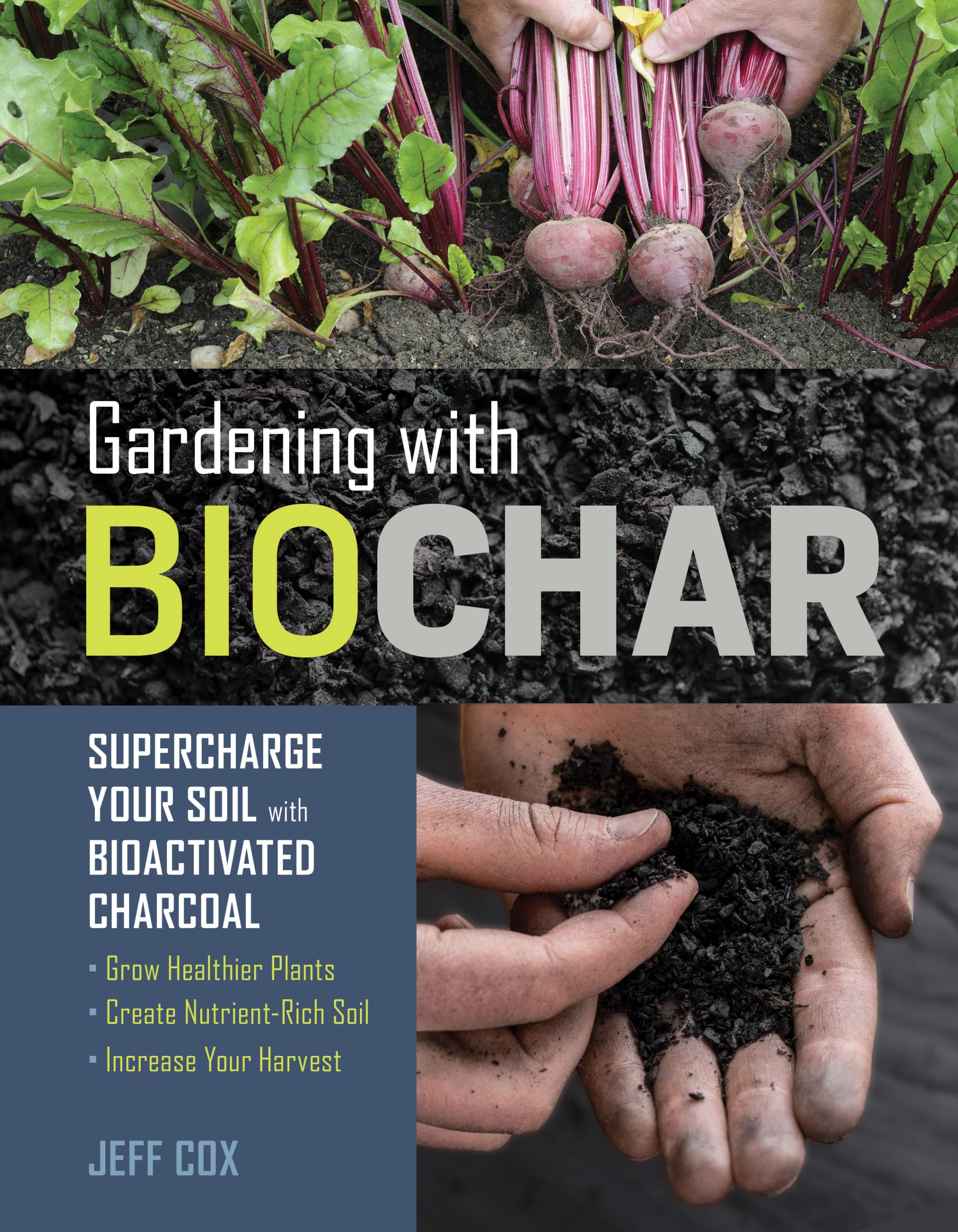 Supercharge Your Soil: An Interview with Jeff Cox, Author of “Gardening with Biochar” Author Jeff Cox has published at least 17 books on wine, food and gardening and in the 1970s was the editor of Organic Gardening Magazine when the notion of organic gardening was a mere novelty. In 2019 Jeff took on a subject near and dear to our hearts at ARTi, of course biochar. Admittedly, Jeff is in friendly territory here, but with that being said this book is definitely a fun read for the biochar fan with the terrific graphic design, facts and figures and clear writing style being high points. Even for biochar veterans there most likely will be at least something new. I for one was unaware of the possibility for using worm manure (castings) to aid in inoculating (introducing microbial life to the biochar). I also did not know you could make a small and handy amount of biochar in a wood stove by use of an army surplus ammo can. Jeff does address the unique, almost adventure story history of biochar’s contemporary rediscovery as it is an ancient technology and a proportional degree of science is dealt with in the book. Not so technical as to overload a newcomer as this topic can get pretty technical pretty quickly, but not too little as to leave the reader with too many unanswered questions. Gardening with Biochar ends up being a handy, compact reference guide to biochar that gives background, benefits, science behind, home production methods, best preparation and suggested uses. It will remain in my library indefinitely. So why not hear a bit from Jeff Cox himself as I had the chance to exchange some questions with the author.

How did you first hear about biochar?

I think it was an article I read in Science News about 6-8 years ago. It intrigued me and I began researching the topic. Then I attended a biochar conference at Sonoma State University in California about five years ago.

What was the occasion when you first saw biochar being made, added to soils or generating notable conversations amongst your gardening peers?

I bought some ready-made and used it to good effect in my garden. I first saw it being made right here at home when my son and I made some.

The book has terrific graphics especially the terra preta layers and feedstocks and is mostly an easy read. However, the section “Biochar and the Electron Expressway”   does get a bit scientific and technical. Would it be correct to say: biochar in the soil = more electron transfer = more soil microbial activity = more rhizobia = more natural nitrogen = healthy soils and plants. Do I understand this correctly?

All life activities run on the transfer of electrons when you get down to the atomic level. Biochar facilitates the flow of electrons to cells. They are intimately involved in all cellular processes, so their increased flow produces beneficial effects far beyond nitrogen fixation; really, the beneficial effects occur in all facets of living systems.

As the topic of biochar can be a bit technical, do you think the general public or the less patient or technically minded of us will be able to be convinced of its value?

Well, you have to inform your audience where they live. There’s no use getting into the technicalities if people aren’t technically minded. They’ll just get bored. So you have to present info that is important but easy to understand for the general audience. Anyone can understand that X percentage of biochar in the soil resulted in Y increase in yield compared to Z amount in a control plot.

Should one do a soil analysis of some kind first before deciding on the feedstock to be used?

One could do that, but then you’re getting really technical as you’d have to compare analysis of the feedstock to analysis of the finished biochar. For the non-scientist, what’s important is that the feedstock be uncontaminated with harmful wood preservatives and other environmentally problematic substances. Just nice clean wood, sticks, hay, or what have you.

How do you see the adoption rates of this material and technology going in terms of either individuals or in agriculture?

The proof will be in the pudding. As research shows biochar’s benefits to be undeniable, savvy growers will want to incorporate it because it will increase profits, or yields, or environmental safety, or other sensible factors.

The carbon sequestration component of biochar is one of its most fascinating and exciting aspects of this subject. You have a frank section on this side of it where you say “it’s a tall order” to sequester our carbon from the atmosphere but go ahead get down to making biochar right away nonetheless. Inspiring, but how do you see this going and can we optimize the biochar in our agriculture and horticulture to the needed levels to really make a difference or are we doing so already?

What do you say to biochar naysayers such as environmentalist Vandana Shiva in the only time biochar has been mentioned on the news show Democracy Now (Dec. 4th, 2013) she said it was a terrible thing because you have to burn trees to make it?

I’d say, “What would you rather do to the tree? Allow its carbon to add to the superabundance in the atmosphere and exacerbate global warming? Or would you rather roast the wood and bury it, so that the carbon stays locked in the soil for thousands of years?” Ms. Shiva is wrong when she says you burn the wood. You don’t burn it. That would put its carbon straight into the atmosphere. You roast it away from oxygen, turning it into biochar that not only locks the carbon safely into the soil, but provides a boost to soil life and a consequent boon to plant growth.

Sure. Have you ever totalled up all the plant fiber biomass that goes into landfills around the world each year? It’s enormous.The products of decomposition then drain away to eutrophy our rivers and lakes, contaminate our groundwater, release methane and carbon dioxide into the atmosphere, and degrade the environment, which damages the ecologies that are the basis of natural health.

Thank you Jeff Cox for talking with us and presenting this contribution to the biochar discussion. Once again, Jeff’s book is Gardening with Biochar. Have a look and a read as we did.