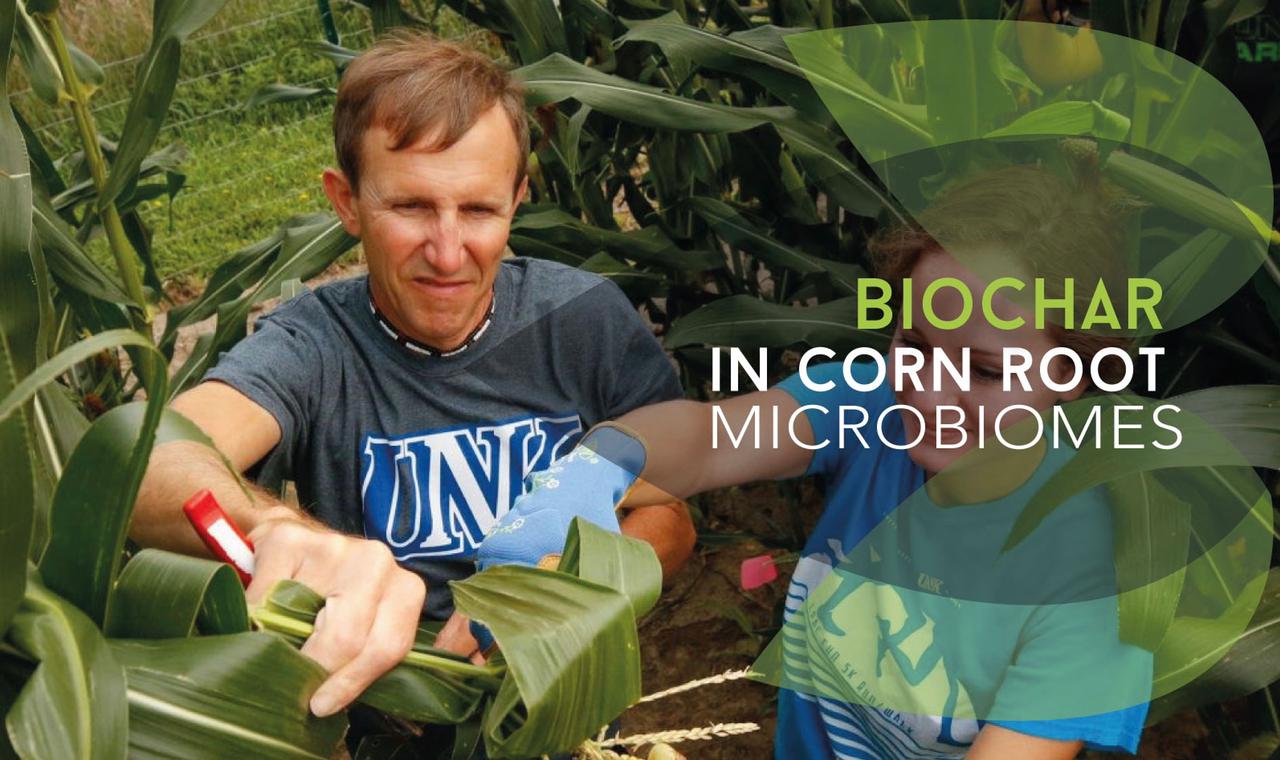 Dr. Paul Twigg holds a PhD in Botany from the University of Tennessee with an emphasis on nitrogen fixation biology. Dr. Twigg has been looking into a number of different topics in plant molecular biology throughout his career but stumbled upon biochar by accident while working on a corn root microbiome project at Kearney in Nebraska. Paul saw that work was being done in Israel dealing with root microbiomes in green pepper plants and biochar was being applied. This work peaked Paul’s interest so in the summer of 2017 he added biochar in different amounts including a control to plots of corn on his own property. His undergrads assisted in looking at resulting chlorophyll content, oxidative enzyme activities of the plants and of the leaves and some plants were uprooted to examine the soil clustered to the roots to complete soil DNA analysis and for population analysis of soil bacteria.

The work started at Paul’s property migrated to plots at the UNK where Dr. Twigg and his students are now examining signaling between corn roots in the microbiome and how this affects the microbiome with biochar as a possible delivery vehicle for inoculum of targeted microbes. New corn plots being started up in the summer of 2018 will be treated with biochar that has added bacteria and plant health and stress factors will again be examined.

Dr. Twigg’s corn plots are in soils that contain clay although Nebraska soils tend to have sand content. The weather conditions in Nebraska can be rather volatile meaning that one day can be warm and sunny and the next stormy and windy. However, looking at biochar as a soil amendment for creating more aeration for the soil, more nutrient capacity as well as for Paul’s primary focus, which is what occurs to the soil microbiome, is ongoing. Dr. Twigg does share many others’ interest in biochar as a carbon sequestration mechanism but this is a secondary motivation for the work that he and his students are undertaking.

As of May 2018, Dr. Twigg has generated data focused on chlorophyll numbers, oxidative enzymes including peroxidase that catalyzes the oxidation of a particular substrate via hydrogen peroxide. This is helpful when looking into plant stress levels thereby when the peroxidase levels are high, the stress levels will also be high. This is due to the plant coping with the production of reactive oxygen species caused by stress. In 2017, Paul and his team had three different plots, one with no biochar present and two with biochar present at different amounts. The plots were five by five meter square, one plot held 40 gallons of added biochar while the other 80 gallons of biochar. From this, they did not observe a huge change in the chlorophyll measurements but there was a marked difference in the oxidative enzyme levels of the plants. The changes in the oxidative enzyme levels suggested to Paul that there would be an affect in plant stress levels by having biochar present in the soil. He is planning to plant in those same plots again soon this year to see if any year-to-year differences can be seen.

Dr. Paul Twigg’s work with biochar in corn root microbiomes is ongoing. We will be checking back in with him later in the summer of 2019 to hear more about his findings. We have many questions for Paul. We will be asking him about what kinds of microbes are undergoing any changes with biochar being present and how much change. We will ask him if plant stress levels are associated with changes in water, nutrients, aeration, microbial symbiotic relationships or disease. We are also interested in what has happened with root development including mass and the volume or depth of root exploration. We would also like to hear about the delivery of inoculum for microbial enhancement as well as what is going on with the mycorrhizae. So, we greatly look forward to speaking with Paul later again this summer.