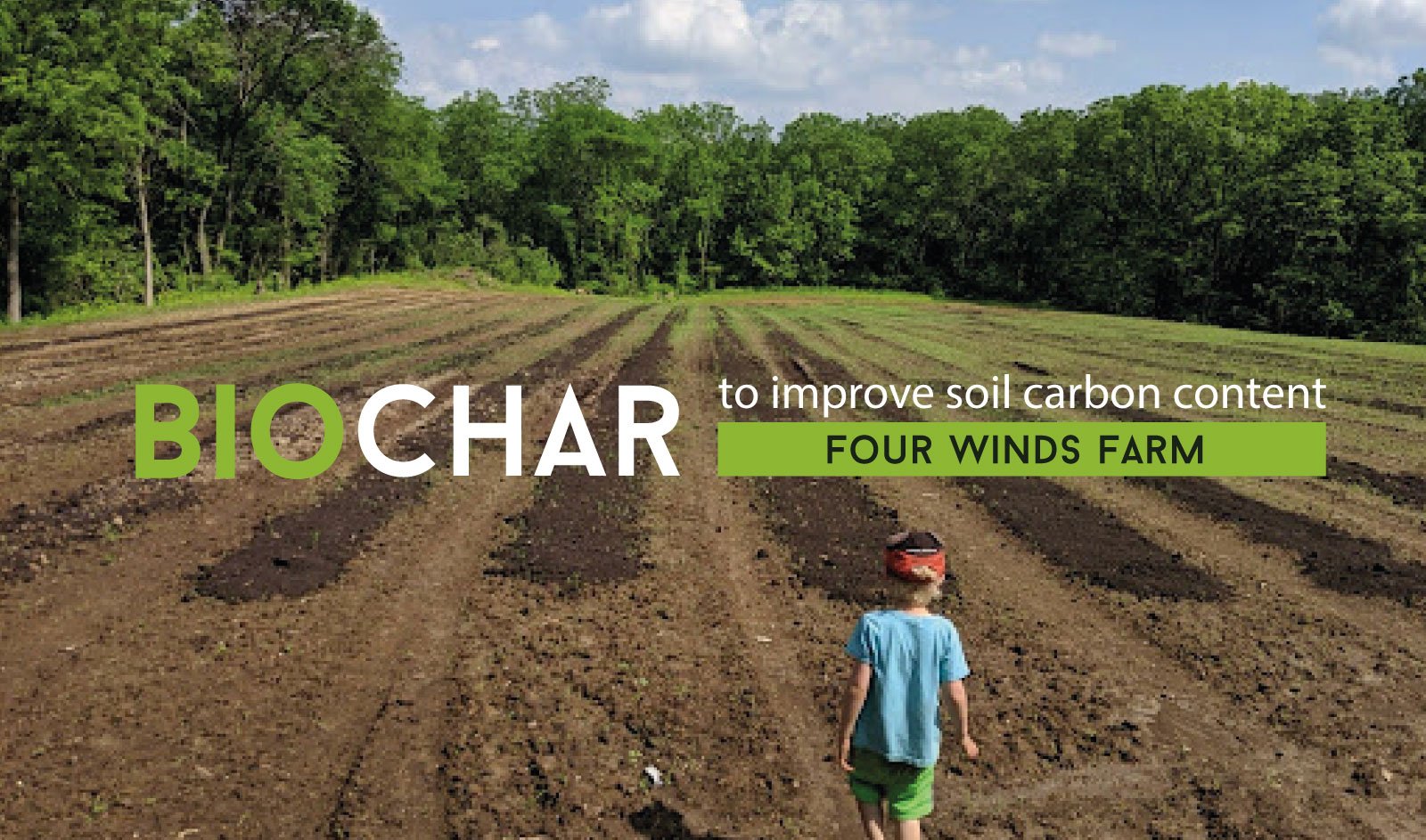 *Note: This article originally published on July 6, 2020 has been updated on Nov. 17, 2020 to share new data on the progress of the project which can be found at the end of the article.

You are invited to view Four Winds Farm website.

Scott Booher’s Four Winds Farm began in April 2020 to amend their soil with compost and biochar to improve soil carbon content (increase organic matter) nutrient availability, structure, and biology. ARTi is assisting in this ongoing effort with soil analysis, biochar and compost analysis, and preparation, monitoring as well as the application. To add to this, the carbon sequestration levels anticipated at Scott’s farm through ARTi’s biochar show great promise. Essentially, the project is about the integration of biochar to improve soil quality and likewise, with the added compost.

Scott, an organic farmer intended to plant 1 acre of hemp cannabis on his farm. The first step was the tilling of the soil which took place over a few months. The aim of tilling soil is to blend organic matter in the soil, break up compacted soil, help control weeds, or to loosen up the earth of the planting area.

Scott and ARTi determined that the soil organic carbon level at his farm needed to be increased. Biochar is one natural solution for this issue. Soil carbon helps plants take nutrients from the soil and biochar is an even more effective form of carbon. Biochar is resistant to decomposition (recalcitrant) and has a unique molecular structure that soil nutrients find beneficial. Because of biochar’s ability to attract and retain soil nutrients, there is the potential to reduce the need for fertilizer. There is also a great deal of evidence to support that biochar as a soil amendment can increase crop yields. Lastly, biochar functions as carbon sequestration technology. Originally, biochar has been made from organic matter feedstocks such as wood chips. There are a multitude of feedstock possibilities for biochar production. Ultimately, however, it is the fact that instead of this biomass decomposing and releasing CO2, the main cause of climate change it is burned without oxygen (pyrolyzed) and transformed into a carbon form, biochar that benefits soil, and locks its carbon preventing to form into CO2 for upwards of a thousand years. (Biochar Is a Valuable Soil Amendment: IBI) The next component to be added is compost. Compost is simply organic material that has partially decomposed through a process called composting. Compost offers soils many positive attributes and is used by the smallest garden to the largest farm. It is a soil conditioner and has plentiful nutrients. At Four Winds Farm, the compost is being added to the biochar and then incorporated in the the soil to help increase the soil organic carbon.

Following Scott’s initial work of tilling the soil, the next step was for ARTi and Scott to conduct a soil analysis. It was found that the soil pH level at Scott’s acre was quite good. Soil pH is a measure of acidity or base levels in the soil and affects many chemical processes in the soil, that in turn, have a substantial effect on soil nutrient availability for the plants. On the other hand, the soil organic carbon level was quite low and this is where ARTi can help. The organic carbon level was measured at 3% and can be brought up to 5%. As a result of the soil analysis, ARTi calculated how much biochar was going to be needed and how much compost there needed to be (calculations from Carlos) added as well. From an initial level of 3% organic matter, ARTi and Scott brought the level up to 7% with 5% being completely recalcitrant (resistant to decomposition) and with 2% coming from the compost. The 2% of non-recalcitrant carbon will last 5 to 10 years. Ultimately, Scott Booher’s goal was to increase the overall levels of organic matter in his hemp field. This is the reason for the mixture of biochar and compost. Scott tilled the soil and ARTi prepared a compost and biochar mix. ARTi brought 19 yards of biochar and mixed it with compost and spread it into Scott’s acre. ARTi Biochar delivered and ready to be added Biochar and compost mix added to the field

The hemp seedlings are to be sown in the month of June 2020. According to Carlos Gonzalez, Agronomist working with ARTi “there are three critical factors to consider during (hemp’s) germination stage: substrate, nutrient availability and water quality.” The hemp plants shown here have developed a yellowing in the lower foliage that indicates an intermediate nitrogen deficiency. This deficiency is being addressed by adding a micro-biological tea to the crops two or three times a week. Scott Booher sprays the mulch layer with the micro-biological tea after all the soil has been prepared. The improved quality soil archived after the amendments In late September, 2020 an additional soil analysis was undertaken at Four Winds Farm. A pH analysis made using an EC meter as well as a lab analysis of soil samples demonstrated a number of highly encouraging results. The soil organic carbon level which ARTi had hoped to bring from the original 3% to 7% came to exactly that (increasing 4%) with 2% with the recalcitrant (non-degrading) biochar portion, which will last in the soil for hundreds of years. Besides the Organic matter, Macro and Micronutrients significantly increased with the compost primarily responsible for this. In total, 18 cubic yards of ARTi biochar was added to Scott’s 1 acre field. This was 6 tons of biochar multiplied by three amounting to 18 tons of CO2 sequestered representing the contribution of the biochar carbon alone. However, the soil with biochar enhancement can have much  greater carbon sequestration ability in the coming years, perhaps coming up to 50 tons of CO2 in the 1 acre field due to greater soil health and increased biomass production, deposition of plant matter and by increased microbial biomass in the soil. 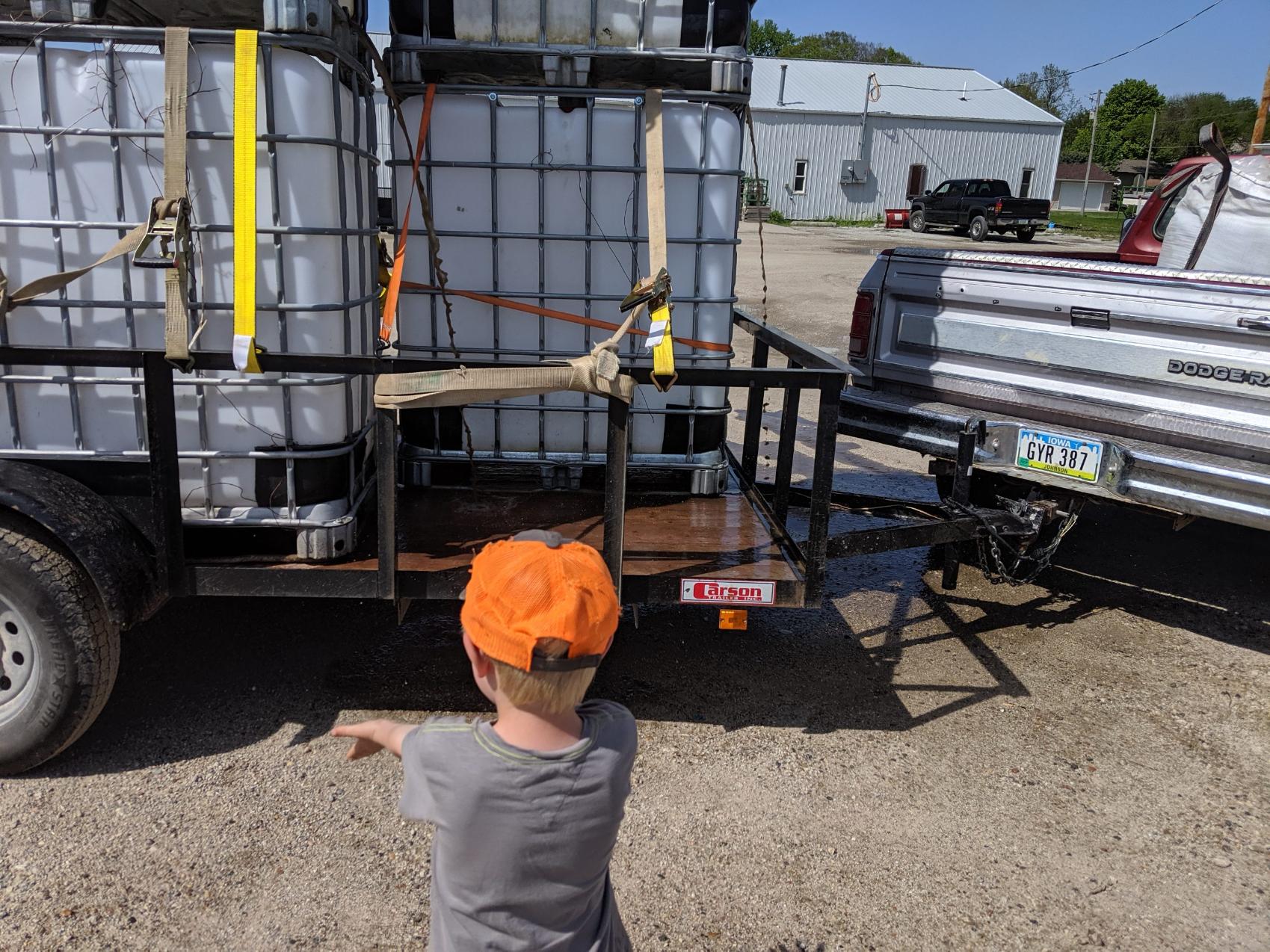 ARTi Biochar arrives on Four Winds site. We like totes!