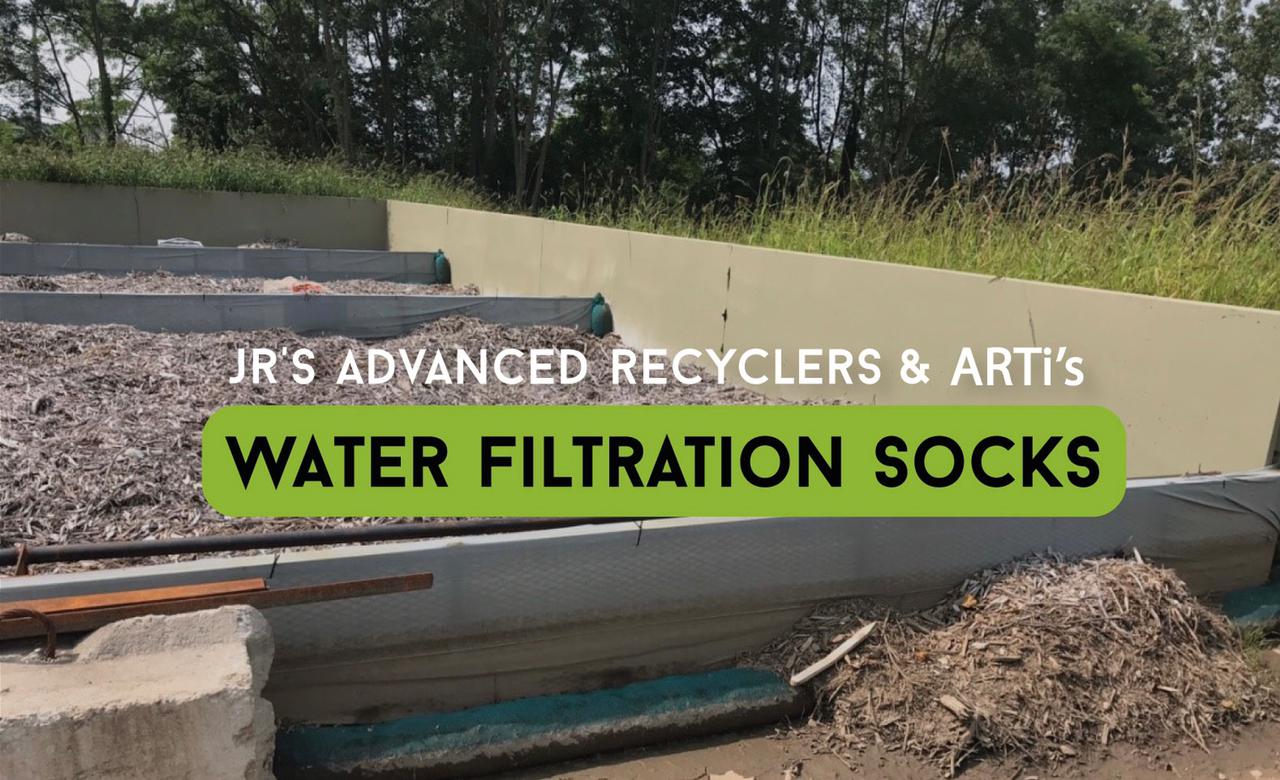 ARTi had the chance to employ biochar for a use that is often under-reported. Biochar, in addition to its many other compelling abilities, can also be used in the filtration of water runoff in situations where there is substance present in the water that needs to be reduced or controlled. In this case, the substance was iron and the business ARTi had the pleasure of helping was JR’s Advanced Recyclers in Grove Heights, Minnesota. JR’s Advanced Recyclers deals in the recycling of scrap metal, appliances, and electronics. For those of us concerned with issues such as E-waste it’s great to hear that biochar can be used to support the responsible recycling of such materials. On their annual checks JR received a notice that iron levels were slightly higher than discharge limits. JR determined that there must be an added step in their water filtration system to improve the removal. After contacting ARTi it was decided that biochar “socks” would be added to the last step in JR’s filtration system. Biochar has shown to have great adsorption capabilities. The table below shows the results from a number of testings from other industrial waste waters performed where heavy metals are present. Activated biochars and commercial activated carbons were evaluated.

Preliminary Studies (Trial 1: Table 1) Shows results from industrial tests completed in Iowa, US that Activated Carbon Biochar removes contaminates to a greater degree. Lead (Pb) was reduced from 85.8 ppm to .24 ppm, copper (Cu) went from 19.5 ppm to .006 and nickel (Ni) went down from 89.1 ppm to .75 ppm when filtration was conducted with Activated Biochar passing limits test set for discharge levels.

Comparisons with Commercial Materials (Trial 2: Table 2). In these tests the levels of contaminate metals were brought down as well to the degree that most reduction rates would pass limits tests set for discharge levels. All Activated Carbons and Biochars used reduced contaminate levels and when used in potentially larger amounts even more contaminate levels would be reduced. Biochar used for filtration purposes is produced at a higher temperature than that which is used for soil amendment. It also goes through an activation step generally using steam or chemicals to increase the adsorption capacity. This would be termed “activated carbon”. However, ARTi takes the concept of activated carbon a bit further. The main disadvantage of traditional activated carbon and its implementation is the cost of production. To produce activated carbon in a renewable manner it requires a unique and expensive feedstock, such as coconut shells, almond shells, or hardwoods. The technology developed by ARTi Inc., however, produces char from agricultural and forestry residues and other feedstock that are inexpensive and abundant. With the expansion of this technology in a cost-effective manner, many water and waste streams can be purified or decontaminated. For absorption or filtration purposes, the biochar or activated carbon was contained in “socks” or packaged units that could be placed at stages of Advanced Recycling filtration system. ARTi’s partner in this project, JR’s Advanced Recyclers based at Inver Grove Heights, Minnesota provides recycling services for Minnesota, Wisconsin, and Iowa. They recycle electronics and appliances for individuals, companies as well as for public services. The topic of unwanted electronics or E-waste along with unwanted or unusable appliances such as refrigerators has long been an issue for our society. Consequently, it was a terrific experience for ARTi to be able to help JR meet their obligations in terms of compliance with environmental regulations. JR’s facility is located near a small lake which feeds into a nearby river. Recycling facilities such as JR’s often must keep track of metal contaminants and in their case this time the material was iron. ARTi sent Advanced Recyclers 100 feet of biochar socks at 8 inches width to install in their filtration system which sits on a small hill above the nearby lake. The installation of ARTi’s biochar “socks” was successful in reducing the iron contaminant to an acceptable level. It is a great thing to see that biochar can have rather fast-acting and highly positive effects in maintaining healthy local environmental quality and in a capacity outside of biochar’s typical associations with soil and agricultural usage.

ARTi’s Biochar Socks with corn stover used to add to the system’s length.

ARTi looks forward to continuing to work with JR’s Advanced Recyclers in assisting for maintaining environmental compliance and in reducing facility emissions. Both parties, as well as the surrounding community and ecosystems, stand to benefit from the implementation, development, and improvement of technologies and methodologies that reduce or prevent harmful materials from contaminating the surrounding areas.