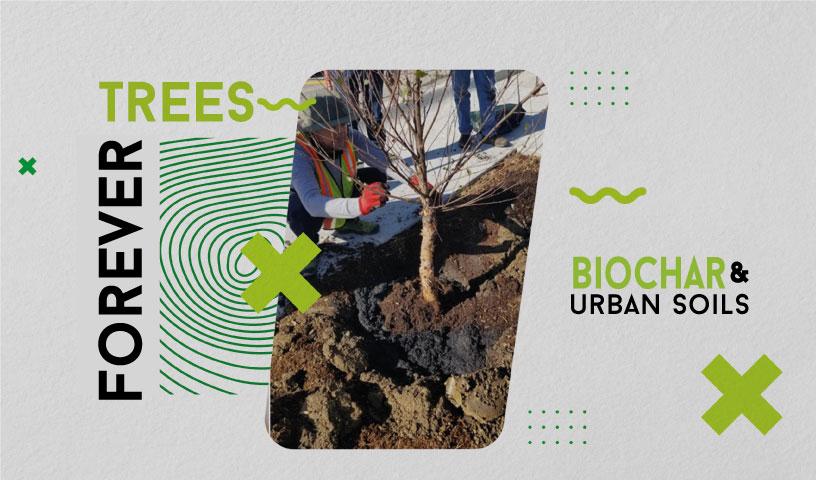 By Justin Beck and Shane McQuillan

The City of Des Moines, Iowa and the tree planting and forestry advocacy non-profit Trees Forever represented by their member Kerri Sorrell recently partnered with ARTi for a biochar and tree planting project right in the middle of urban Des Moines. When passing through the cities or suburbs, whether by foot or bicycle along those long and often empty sidewalks most of us take little notice of the small plots of earth where one tree is planted apiece. Cumulatively, the effect is a good one. The avenues all lined with trees and when they grow a bit larger the positive difference does become apparent. However, what if these small plots of urban soil and the associated saplings could become part of the carbon sequestration effort? Furthermore, what if the trees themselves could become much more robust and healthier due to such an effort?

On an avenue in central Des Moines several small tree plots were selected for biochar application. A portion of soil was removed, blended with biochar provided by ARTi and then returned to the plot with the sapling included. A small amount of biochar was then added to the topsoil surrounding the new tree. Ideally, biochar would be mixed in with the soil with the best possible contact with the trees’ roots. However, in this case that was not entirely possible. Nevertheless, the biochar added to the topsoil will aid in filtering out and protecting the trees from salts or other contaminants that can come into contact with the tree pits over the course of a given year. A number of nearby plots were planted without biochar as a contrail for later comparison. Our expectation is that the trees with biochar will grow more than those without.

Two 5-gallon pails of biochar were added per tree. The first gallon of biochar was added to the bottom and then the tree was then placed in the pit surrounded by its own soil. The second pail of biochar was then spread on top.  Cumulatively the effects that adding biochar should have include storing carbon and improving the soil for the trees thereby likely resulting in better trees that require less water and nutrients. The carbon sequestration potential is approximately 5kg of biochar per bucket, –> x2—> ~ 20lb x3=60lb of co2 sequestered in each tree and we can add a lot more!!! And this is for each tree. Greater numbers of and healthier, larger trees sequester more carbon as well. Soil enhancement should be quite significant. All of us involved in this project expect to see some improvement as the soil was of incredibly poor-quality containing large amounts of gravel and clay heavy loams. We planted half of the trees with biochar and 7 without biochar. For all involved, it was an outstanding experience to plant the trees, work with and meet lots of amazing volunteers and interesting people with a common goal for the day.

The biochar component of the project was organized by the Public Works for the City of Des Moines, Iowa in partnership with ARTi with the non-profit Trees Forever being the planting partners. Shane McQuillan, the Urban Forestry Project Manager for the City of Des Moines Department of Public Works having visited biochar sites previously thought it would be useful to see the biochar’s effects on urban soils. Des Moines has 50,000 trees within the municipality with the ones growing in tree pits being of most interest according to McQuillan. ARTi’s Bernardo del Campo and Shane McQuillan joined a team of tree-planting volunteers provided by a local Des Moines company to complete the project. Shane McQuillan and the City of Des Moines have expressed excitement at the possibility of biochar improving urban soils as typically such soils are not optimal for tree growth. Plans are in the works for Des Moines to add greater numbers of biochar enhanced tree pits in the spring of 2020. Naturally, ARTi shares Shane McQuillan’s growing interest in biochar and welcome further plans.

The organization Trees Forever has been operating in Iowa since 1989 as an advocacy organization for tree planting and numerous other environmental topics in particular to aid in the response to invasive species such as the Emerald Ash Borer. The larva from this invasive beetle tunnels under tree bark harming the trees’ ability to transport nutrients and water. While biochar may not be able to fend off invasive beetles, it can greatly aid in a tree’s ability to make optimum use of soil water and nutrients.

Another noteworthy element of this project is that the public can access direct information about it. The City of Des Moines has a tree inventory available for anyone to use. At any time, every city owned tree can be pulled up on your phone, with the species, size, environmental benefits and many more attributes being shown.

If you are in the Des Moines area and would like to visit the sites, Shane McQuillan at the Department of Public Works has offered to provide assistance with using the software.

Find the City of Des Moines mobile app at the following: link