Abundant and Stable Mollisols: The “Terra Preta” of the Midwest US 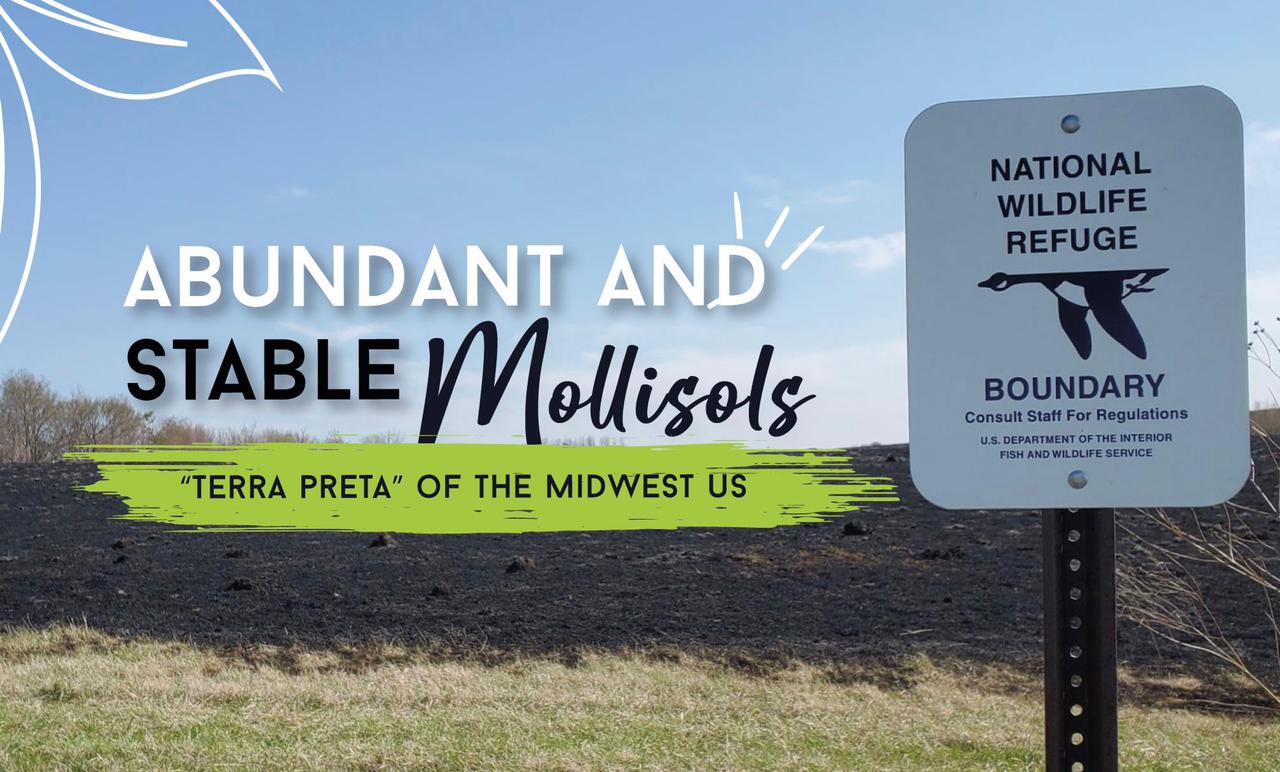 Central to the story of biochar is Amazoinian Terra preta, fertile anthropogenic (meaning human made) dark earths in Amazonia that were enriched with char more than 8000 years ago. 1 Terra preta is the result of char and  household waste (bone, broken pottery, compost and manure) mixed into the native soil, Oxisol, which transformed this otherwise low fertility soil into a more productive soil. But is Terra preta, ancient carbon rich soil only found in the Amazon basin? 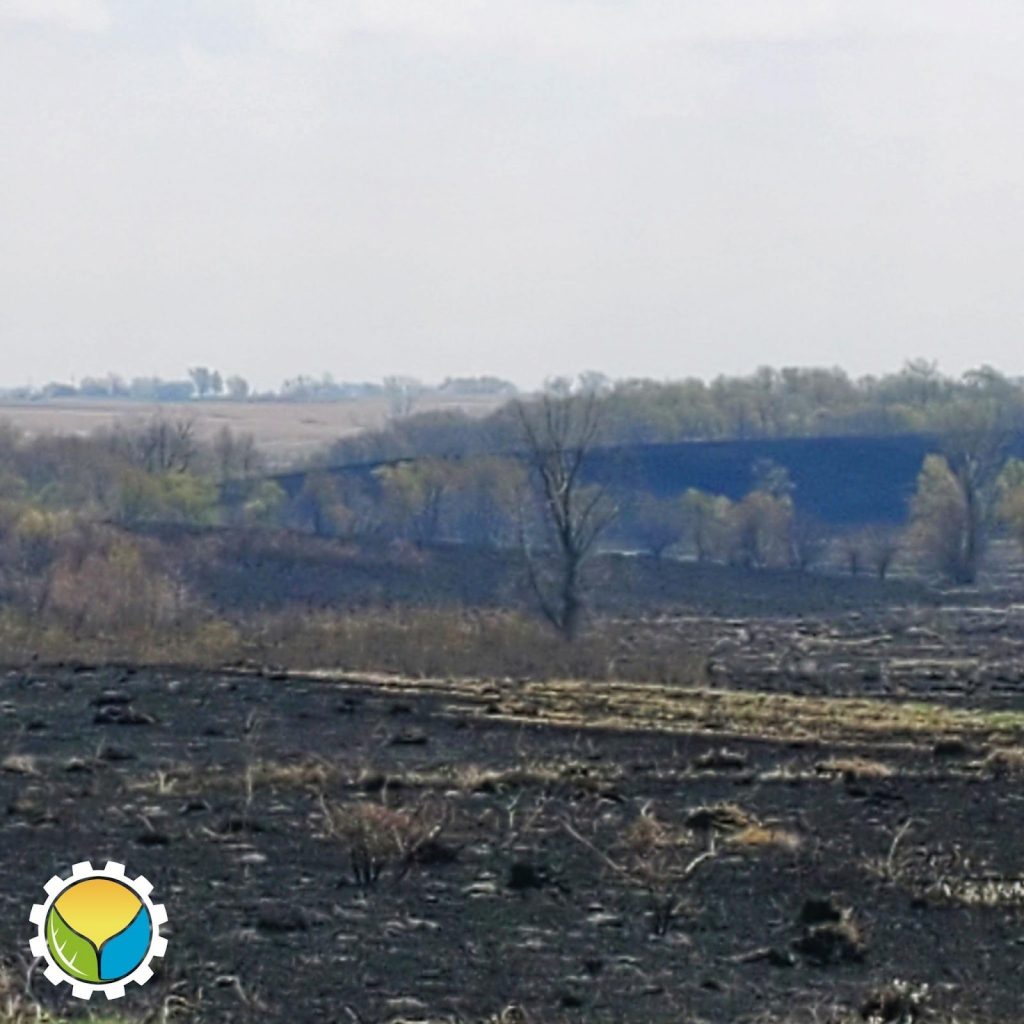 Results of a prairie fire in Iowa: How Mollisols were formed. 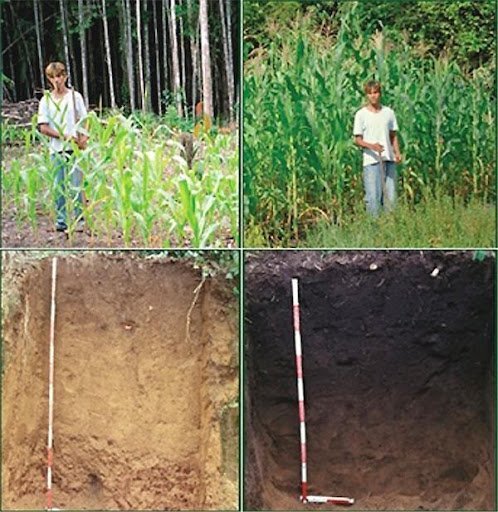 Indeed, Terra preta may only be found in the Amazon; however, Mollisols are fertile, char-containing soils that are more common. These grassland-derived soils are widespread in central North America, i.e. the U. S. Midwest and parts of Ukraine, Russia, Argentina, and Uruguay.2 These fertile soils account for a considerable portion of global grain production. Mollisols prove to be highly stable and fertile soils in their own right. The origins of Mollisols rival Terra preta in terms of natural history and anthropogenic influence. The char present in Mollisols has been attributed to lightning-ignited grassland fires, native peoples intentionally lighting fires for sustaining and moving bison as well as topography, climate and time. As much as 40-50% of organic carbon in Iowa Mollisols has been shown to be charcoal carbon  Recently, the midwest US indigenous people’s land use practices have been further recognised, particularly the open burning of crop residue. In the 2003 paper for Environmental Science, Identification of factors that aid carbon sequestration in Illinois agricultural systems by Hollinger and Krug. The authors write:

While there is evidence that the Terra preta found in the Amazon region aided in agriculture, the anthropogenic contributions to the prairie fire Mollisols is, however, less clear. The initial speculation is that as the native people of the plains are already known to have been more involved with hunting practices than stationary agriculture. The assumption would be that the human induced prairie fire soil carbon is a result of hunting practices. A paper published by the National Academy of Sciences of the US titled Indigenous impacts on North American Great Plains fire regimes of the past millennium by Christopher I. Et al. cite evidence of “dated fire deposits and climate records that indicate that ancient bison hunters burned in response to favourable climate conditions.” 4 This is an indication that the fires set by native peoples on the plains were intentional and that even small hunter-gatherer groups could achieve a significant impact.

The relative ubiquity, stability and fertility of Mollisols holds significance for a number of reasons. To feed the estimated 9 billion people on the planet by 2050, a number of coordinated agricultural, economic, and social strategies will be needed, including improvements in nutrient management of cultivated soils to increase crop production. Large-scale application of biochar to soils has been suggested as a way to improve food security by improving soil fertility while also sequestering carbon from the atmosphere. Understanding the relationships between biochar structure, stability, and soil fertility is needed to bring this approach to fruition. 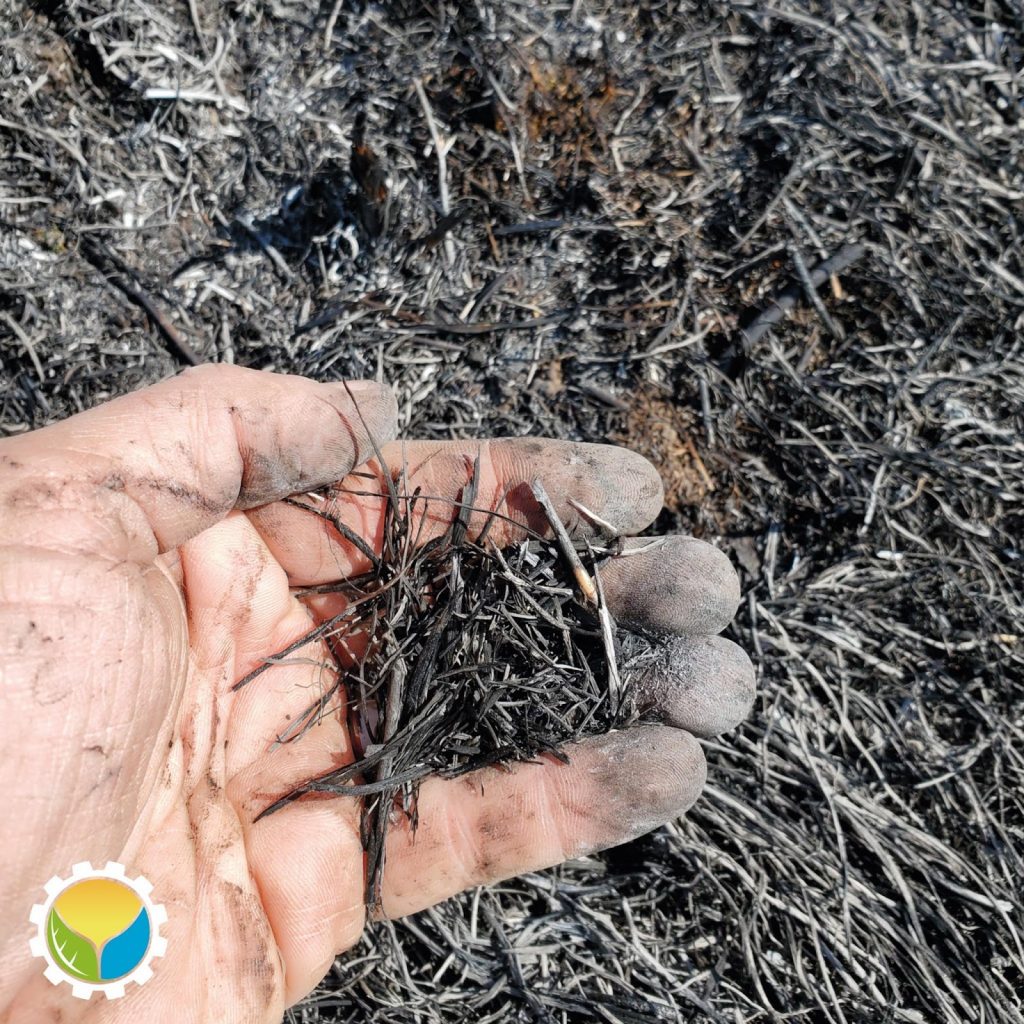 Therefore, a comparison of Mollisols with Terra preta in terms of examining their levels of stability and ability to aid in soil fertility needed to be conducted. Researchers at Iowa State University conducted this comparative study. Their research is detailed in an article titled Abundant and Stable Char Residues in Soils: Implications for Soil Fertility and Carbon Sequestration in the journal Environmental Science and Technology. The authors used quantitative C nuclear magnetic resonance (NMR) spectroscopy to examine both Terra preta and Mollisols. Spectroscopy is able to detect  the interaction between matter and electromagnetic radiation as a function of the radiation’s wavelength or frequency. NMR spectroscopy can observe local magnetic fields around atomic nuclei. This is important because this is how the Mollisols’ and Terra preta’s stability and ability to aid in soil fertility can be determined. An examination of the local magnetic fields showed that Terra preta and Mollisols comprise  ∼6 fused aromatic rings. And what does this mean? Aromatic rings are a molecular structure that have two or more carbon atoms in common. Just as a bridge or freeway overpass are sturdier when they have more concrete pillars to hold them up, so are the soil carbons found in Terra preta and Mollisols. Therefore, Terra preta and Mollisols will hold their carbon in the soil for centuries which is excellent for the carbon sequestration topic.  Mollisols are largely composed of minerals. Organic carbon in Mollisols accounts for 0.6% up to about 4% of the soil by weight. In comparison, biochar and Terra preta have a larger carbon content.  The improvements made to the soil with biochar addition last for a lifetime. As such, biochar, Terra preta and Mollisols will hold their structures for a long time to aid in the soil’s cation-exchange (cat-eye-on) capacity or CEC. And what is cation-exchange capacity? 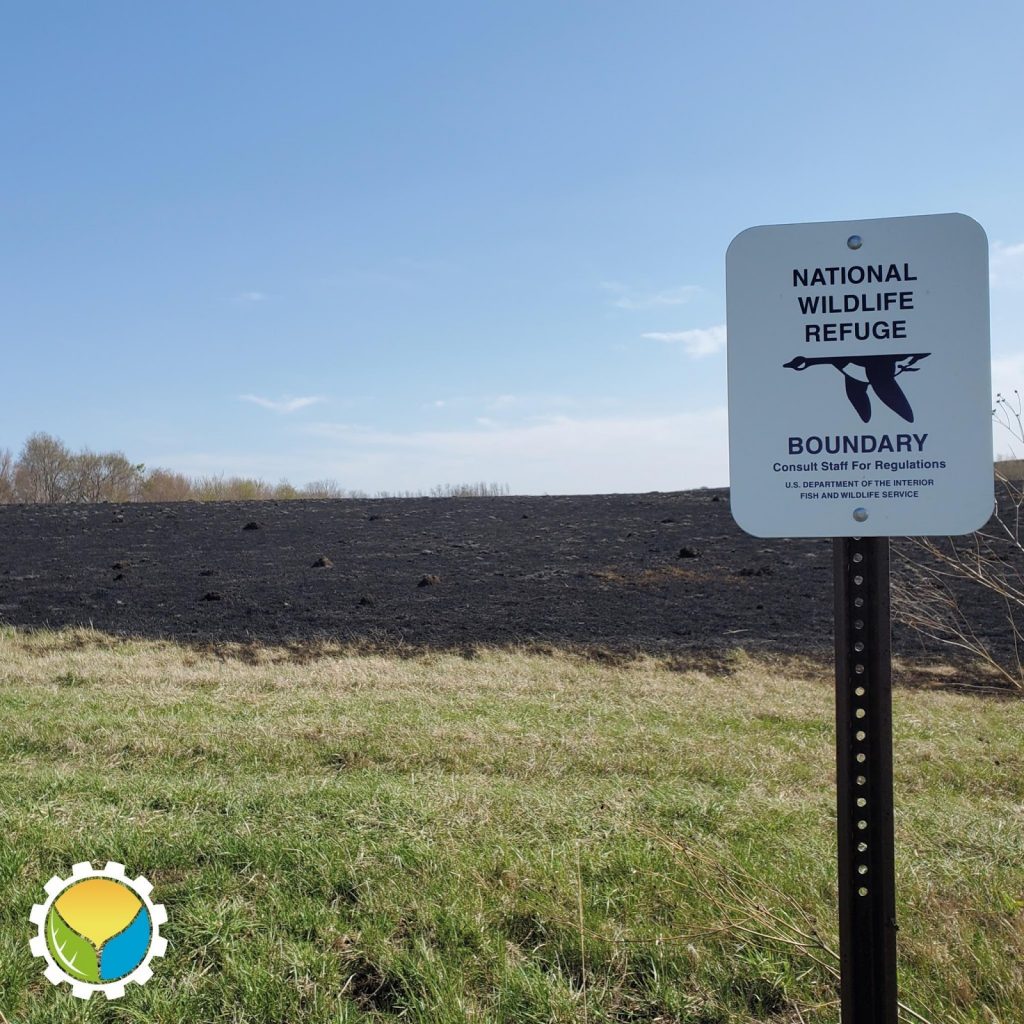 Edge of a prairie fire in the Neil Smith National Wildlife Refuge (Iowa),frequently carried out  as a  natural management practice. 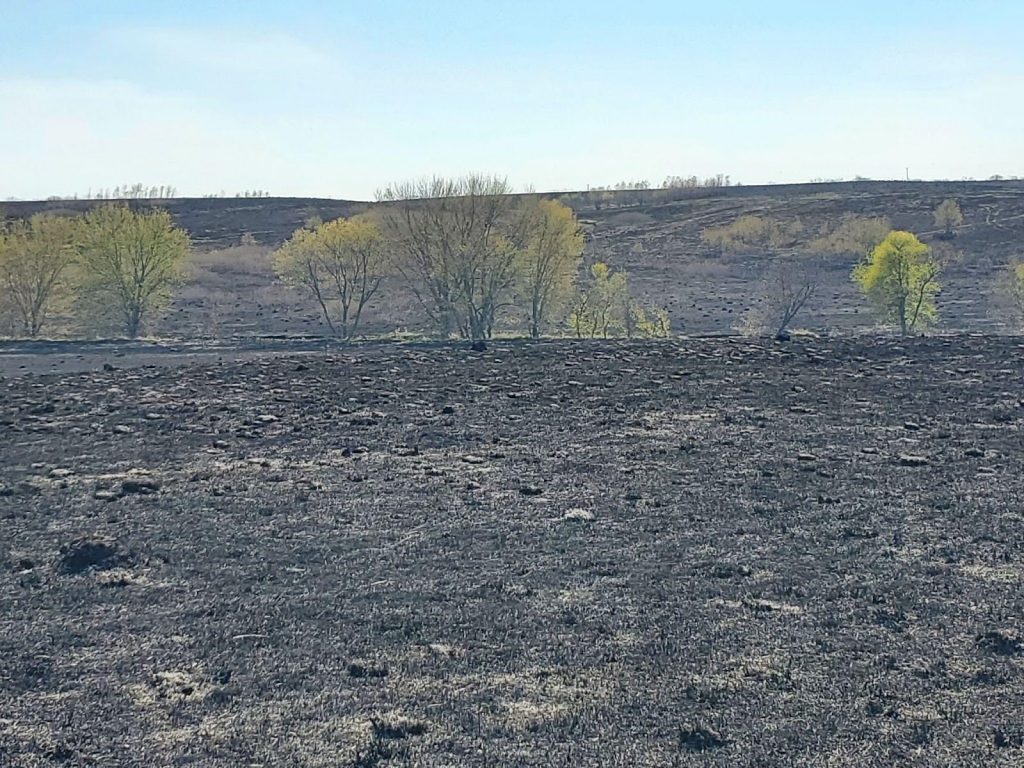 Aftermath of prairie grass fire in Iowa. It appears as devastation but this isn’t the case.

Cation-exchange capacity is the level of a soil’s ability to retain and release cations (exchangeable). Exchangeable cations is a soil chemistry concept. It explains the degree to which negatively charged particles attract positively charged particles. In doing so, the charged particles (both mineral and organic) hold the cations loosely enough so that they can be transported by water to plant roots. M. L. Thompson and K. Schmidt-Rohr and their team were able to demonstrate that the more widely found Mollisols shared these positive traits with Terra preta adding stronger support to the idea that biochar in Mollisols and Terra preta is stable, highly beneficial and can be utilized and make an impact on large scale (as Mollisols are often found on a large scale) and in a number of different environments. Mollisols and Terra preta’s soil carbons overlap with biochar in terms of composition and characteristics, biochar being the carbon itself without the compost, bone or other fragments.

A balance of biological, chemical, and physical properties are required for healthy soil to keep nutrients in the root zone and available to plants when they are needed. Fertility and yield suffer when organic matter levels are low. Biochar will aid in achieving the balance, resulting in increased soil fertility and health. In the case of Mollisols, organic matter contributes to the concentration of carbon found in Mollisols. 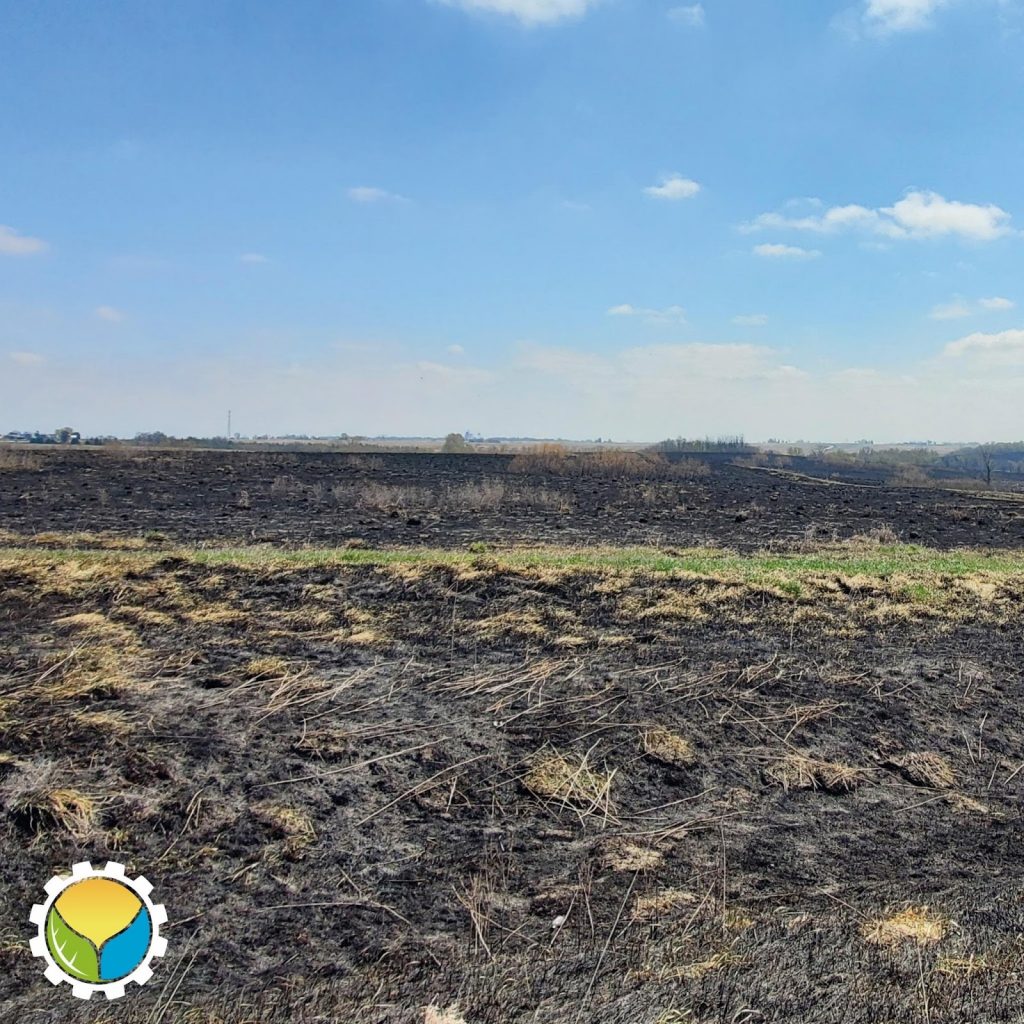 The grass begins to recover from the fires. 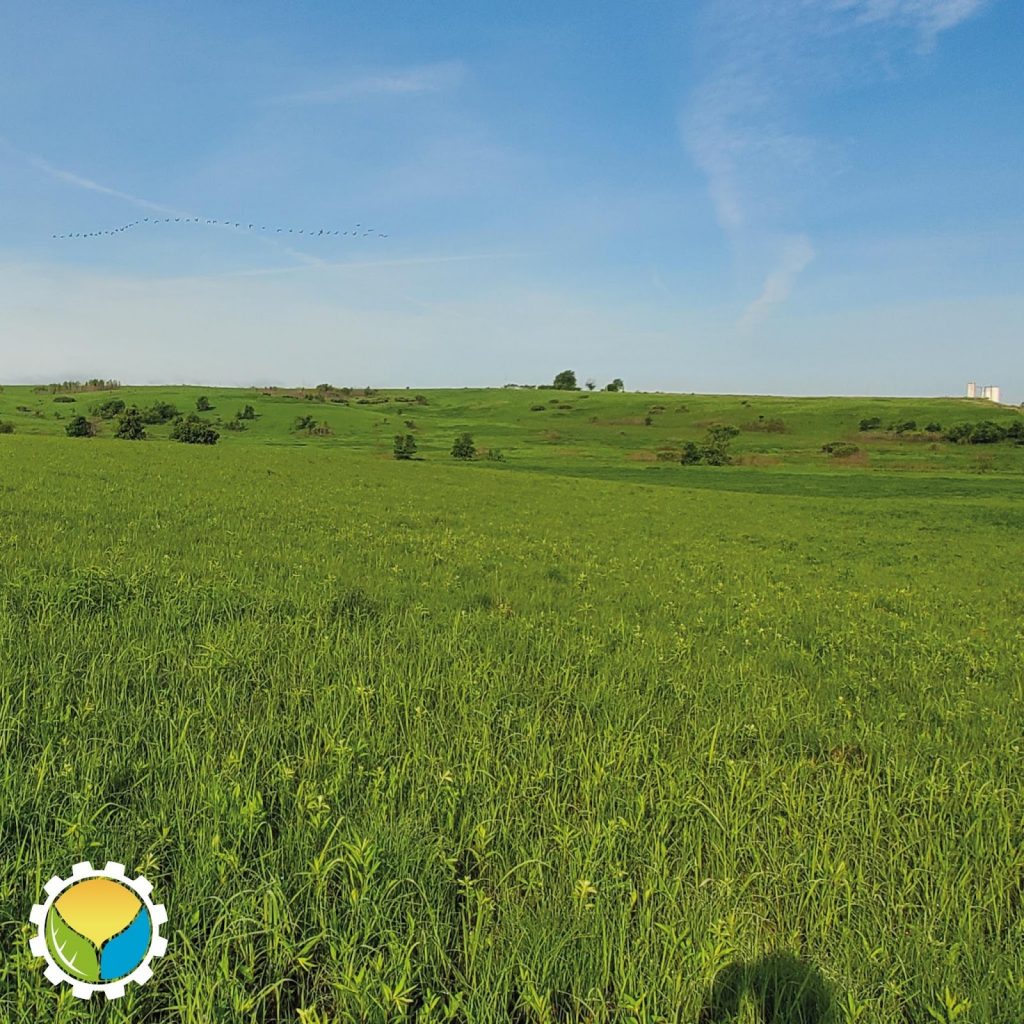